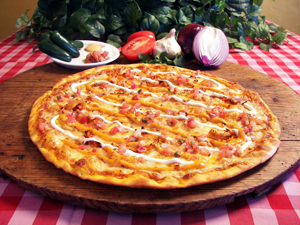 Wine and cheese is a universally-known pair, but what most people may not know is that beer is one of the best matches for cheese. Wine may cover up some of the flavors in cheese while the carbonation in beer creates a lighter acidity and lifts the fats in the cheese off the palate.

Recommended:
All beer is fine.
(Note: for stronger cheeses like goat and blue, grab a darker lager or ale.)

The one rule with dishes like chicken, fish, salads or pastas are that you don’t want to overpower them with a beer. Therefore, lighter is better. A light German lager or Belgian Saison with chicken or fish is perfect. (If creams or sauces are added you need a heavy, richer beer.) Pasta is slightly more versatile but still pairs well with similar brews like blonde ales and German or American wheat ales.

Recommended:
Belgian Blonde ale; German Hefeweizen; American Hefeweizen or wheat beer (as long as it is not too hoppy). Try Duvel (Belgium), Widmer Hefeweizen (US), Blue Moon (US)

In general, fried foods are light in flavor profile, so opt for a brew that will help cleanse the palate. In general ask for a beer to cleanse your palate without washing away all the salty flavors, cutting through and bringing out the taste of the food. The same recommendation goes for most salty dishes as well.

Steak and Cabernet are classic, but darker, heartier beers like brown ales or stouts can balance the bigger meats. It’s all about finding a beer that is equal to the meat. The idea is to balance the sweet malt and bitter aromatic hops. Any big robust beef or meaty food should include a beer that is big and bold enough to stand up to roasted meat like a darker, fuller porter or stout.

Buffalo wings, spicy Thai, Szechuan Chicken and Mexican dishes all go well with light lagers—basically anything with more hops, which help cut down the spices in the food. Little goes better with spicier dishes than a light Mexican-style lager. It’s almost like milk when it comes to spicy food. It doesn’t coat the tongue, but the spice in the hops cut through the spiciness in the chilies and peppers and allows the beer to shine through.

The Chocolate notes in stouts always pair well with brownies or any rich dessert. Lighter, fruit-based lagers or ales can also provide a nice balance or contrast. Think raspberries and chocolate. Beer and dessert is not the first choice for most, but a whole new world of flavors await you when you try fruitier beers with a wide variety of puddings, ice creams or sorbets.

When in Doubt . . . Go Regional
If chicken chimichanga or fajitas are on the menu, then opt for a Mexican brew. Leave it to the country of origin when pairing if the options are too overwhelming. For example, German foods like pretzels, brats, knockwurst,  pair with German beer.

It’s all about trial and error and finding that unique combination of food and beer. The wine industry is years ahead with informing and educating the consumer, so brewers have to step it up a gear and provide some info on how their beers can work with food